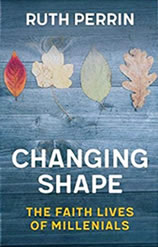 "Ruth Perrin's landmark study of emerging adults who as teenagers described themselves as Christians, reveals what has happened to this apparently "lost generation" - those who have lost faith altogether, those with a faith but who have withdrawn from the church and those with an ongoing active faith which is nonetheless now broader and deeper than previously."

Buy the book | Interview in the Church Times

Ruth has worked with...